Mask Mandates and Lockdowns: Both Are Futile, The Latter is Deadly 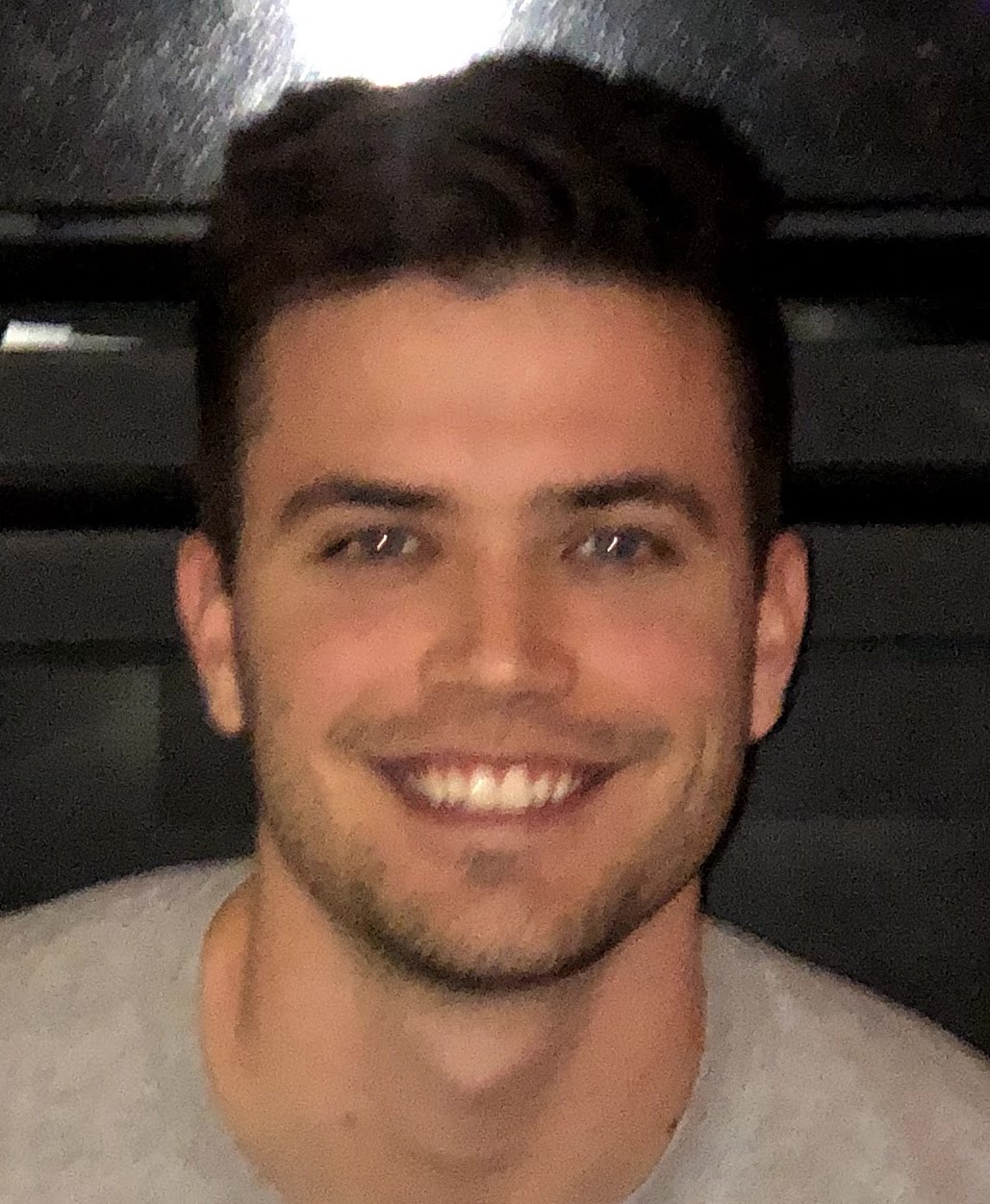 Data visualization is a wonderful thing. It helps us understand important trends that would otherwise be invisible in raw data alone. Now more than ever, data analysts have been instrumental in providing data visualizations that rebut two of the most widely accepted, baseless slogans of the pro-lockdown, militant mask-wearing crowd: "Lockdowns save lives" and "Wear the damn mask." The data tell a surprisingly clear story about the effectiveness of mask mandates and lockdowns in stopping the spread of Covid-19: both are futile, and the latter is deadly.

Without any historical or scientific precedent indicating that lockdowns were even remotely effective at saving lives, governors single-handedly shut down their economies in an effort to quickly do something, anything to slow the spread. Questioning these orders on moral or utilitarian grounds quickly became "questioning the science", an exceptionally strange slogan for its assumption that any evidence existed which vindicated the efficacy of lockdowns. But after only a few months of lockdown, it became apparent that there was no correlation between how soon a region locked down and that region's death toll: The abysmally low R2 value shows that locking down quickly clearly did not matter, but what about locking down in general? Surely the strictest lockdowns would save more lives, right? Hardly. 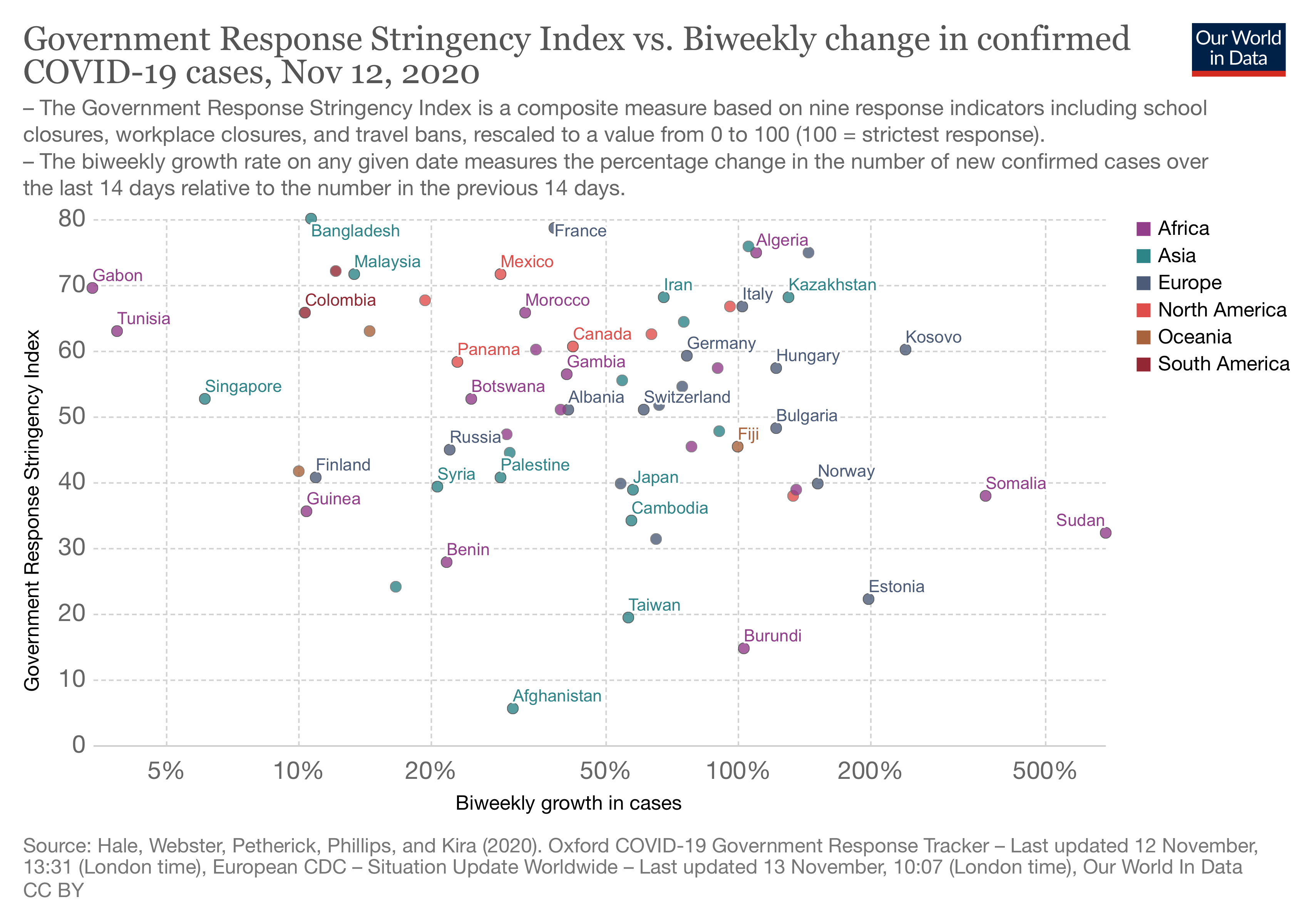 If the science was settled on lockdown efficacy, this plot should unambiguously slope downwards, indicating that more stringent lockdowns are more effective at mitigating cases. No such trend exists. Here is a population-adjusted visualization, courtesy of PANDA, that compares a nation’s lockdown stringency with its death toll per million. 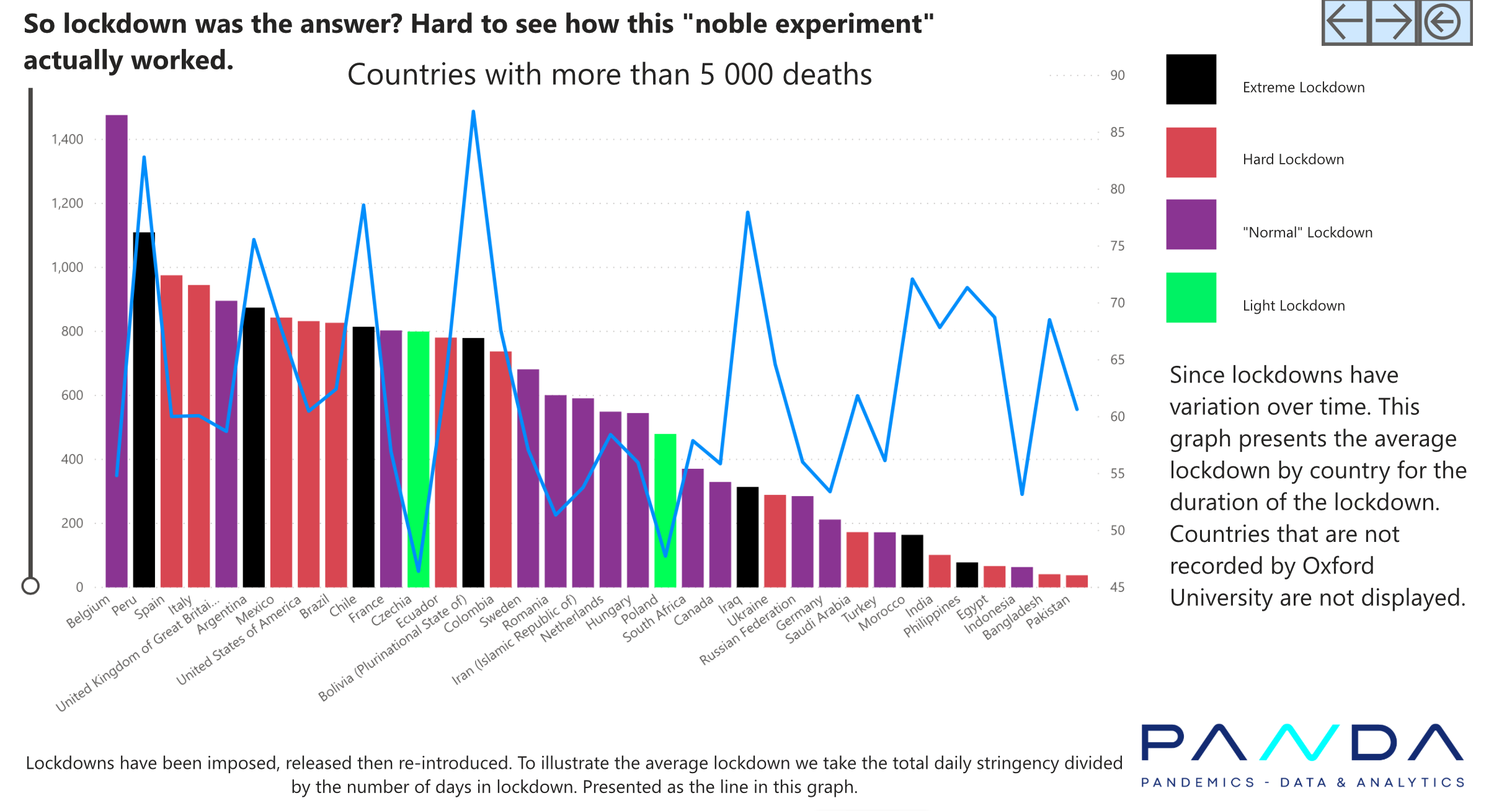 Again, if lockdown science was truly settled, the right half of this graph should consist almost entirely of black and red bars—countries with "hard" to "extreme" lockdown stringnecy—while the left half should consist almost entirely of purple and green bars—countries with "normal" to "light" lockdown stringency. We see no such correlation, and to point out the lack of correlation in any of the above charts will have you anathematized by the mainstream media and their favored health experts.

The costs of locking down

Not only have the lockdowns played no role in disease mitigation, they come with deadly costs. You would think that the pro-lockdown health officials informing public health decisions would have entertained the potential costs of disrupting global supply chains and forcing hundreds of millions of people to remain shuttered in their homes. No matter. When nations around the globe are at "war" with a virus, immediate action is the only option. Damn the consequences.

What follows are some of the most alarming costs of the lockdowns, costs that are hardly eclipsed by the plethora of anecdotal sob stories floating around on social media. The establishment media and public health officials were doomed to look past these potential consequences because of their monomaniacal fixation on “cases,” a fixation that elevated short-term economic thinking and feel-good policies above all else.

Quite clearly the lockdowns are doing more harm than good. Even the Atlantic admitted that asking people in low to middle-income countries to stay home is, in many cases, asking them to starve. There is simply no way to justify the claim the lockdowns save lives with a knowledge of their costs. More can be found on the physical, mental, and social health consequences of the lockdowns at Collateral Global and thepriceofpanic.com.

Governor Mike DeWine of Ohio has embarked on a few lengthy Twitter tirades about the importance of wearing masks. He recently tweeted that we now know "mask wearing . . . is the chief way of slowing this virus.” Statements like these give the impression that wearing masks slows the spread of Covid-19. The data consistently refute this preposterous claim: 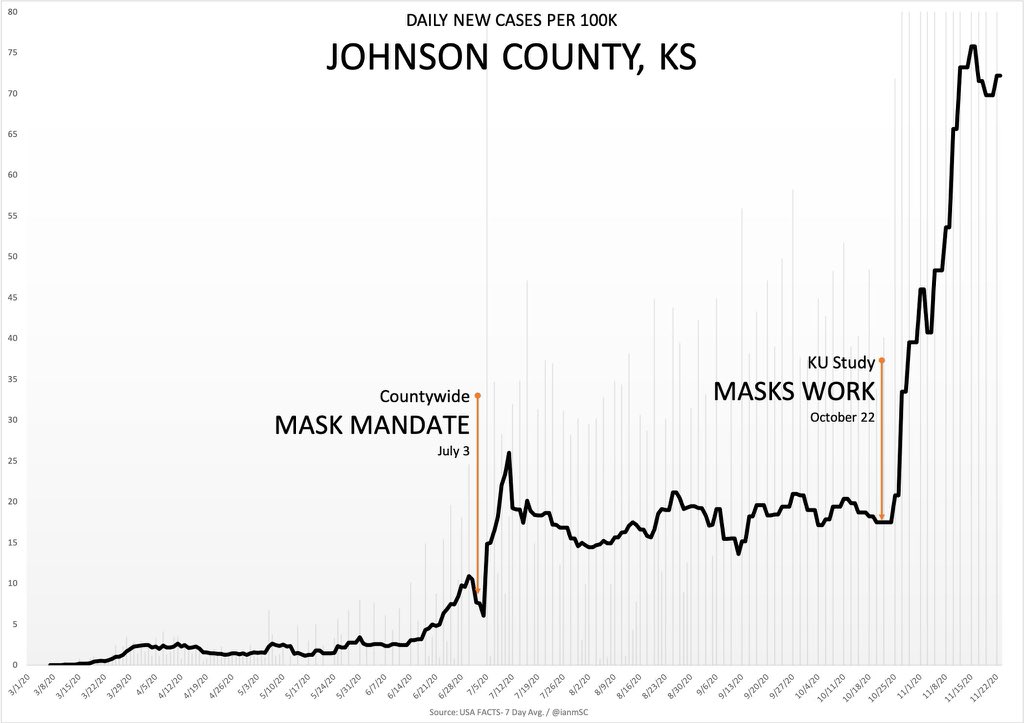 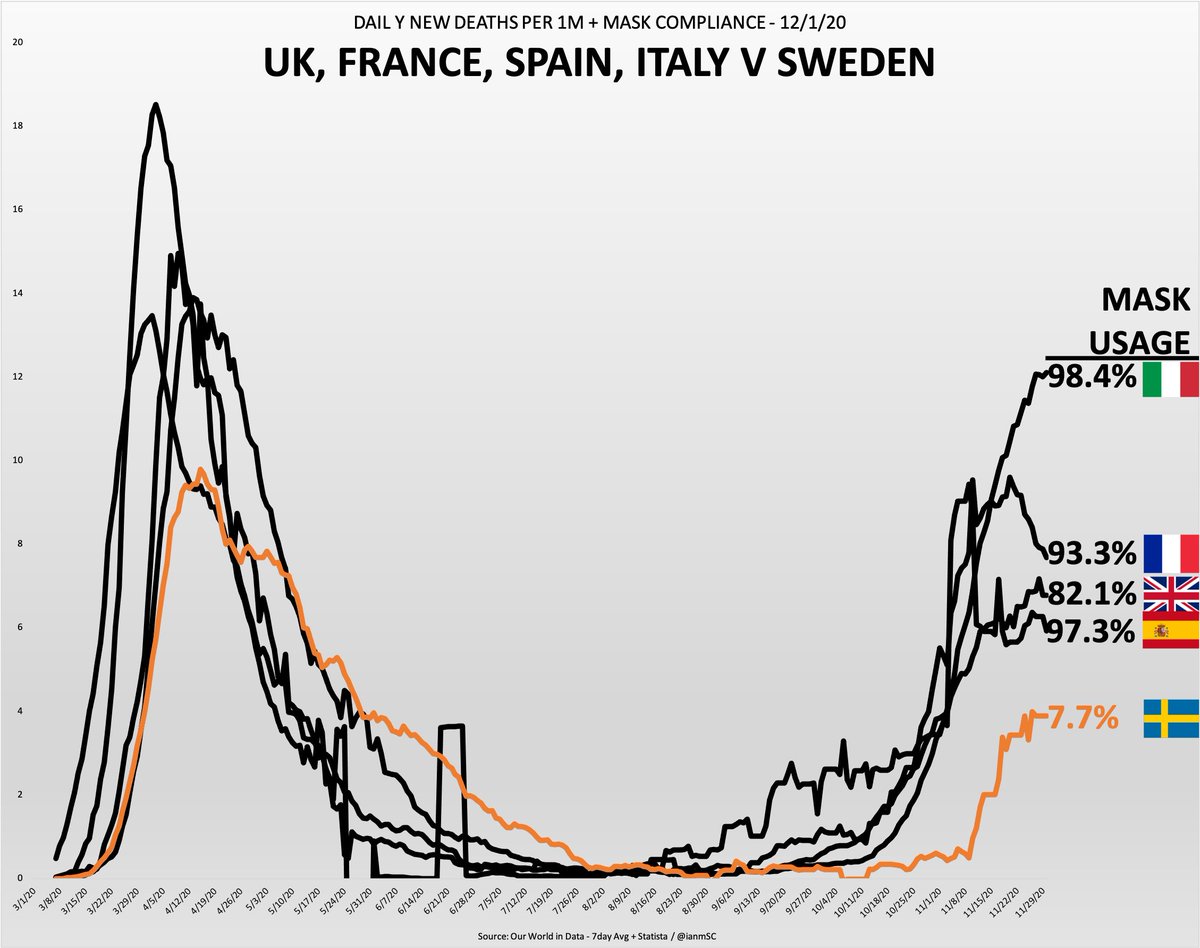 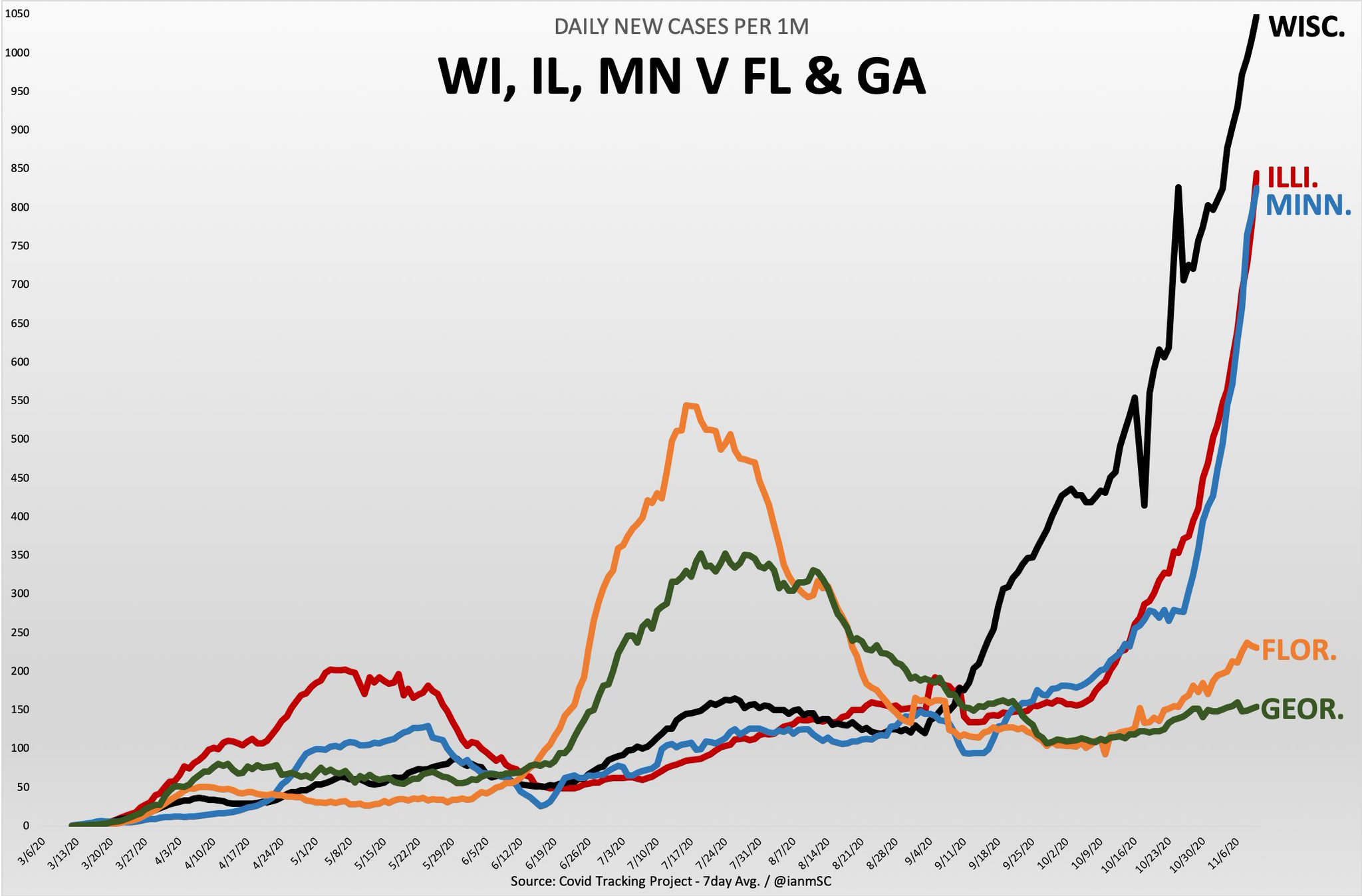 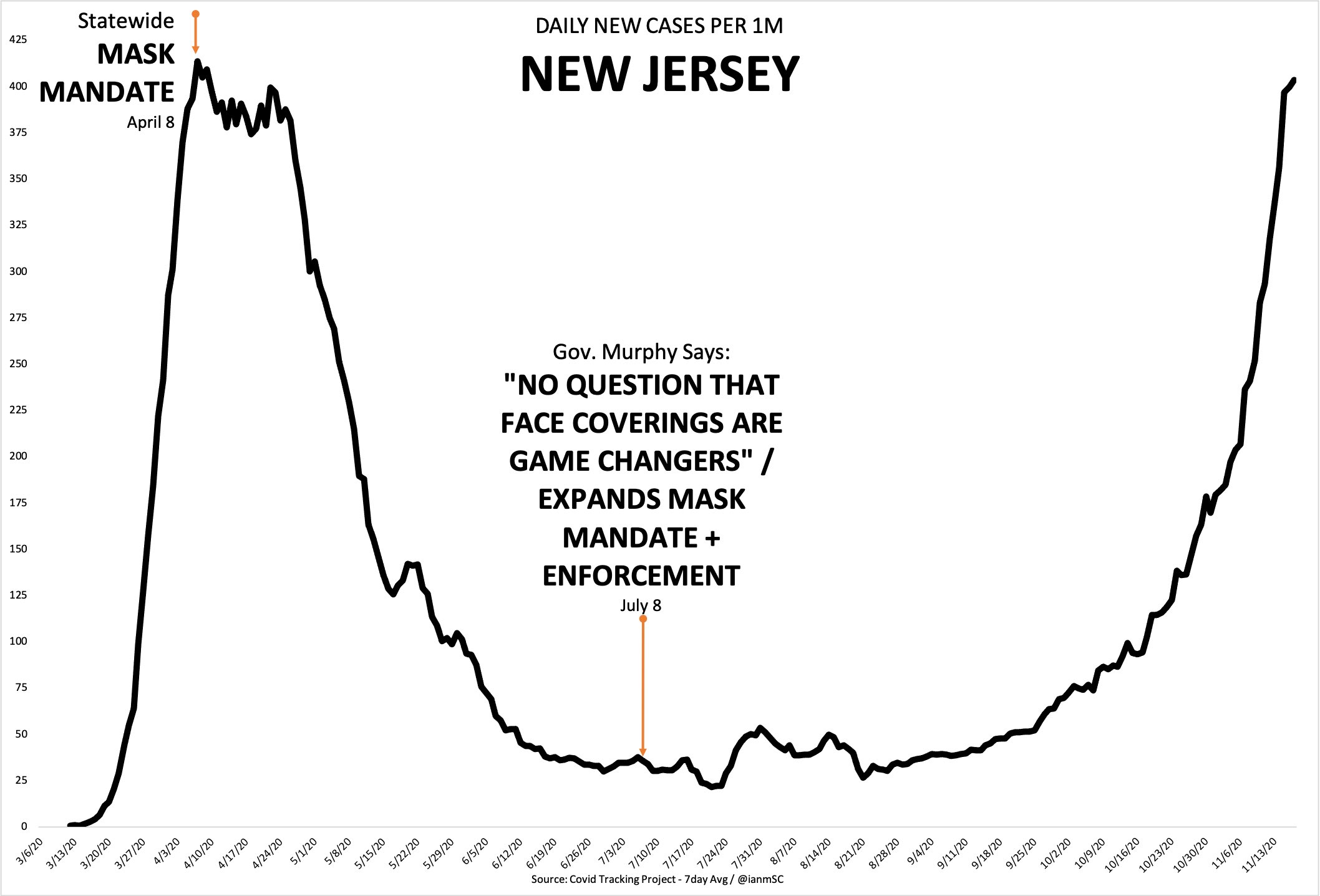 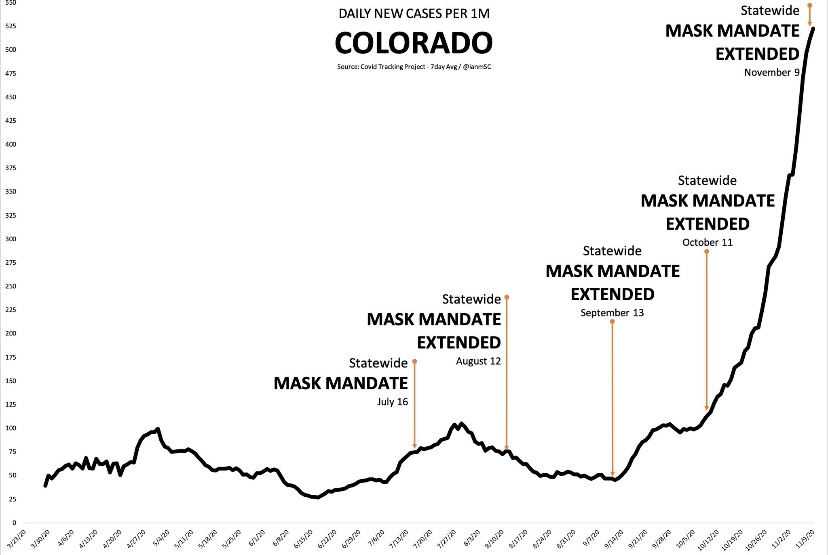 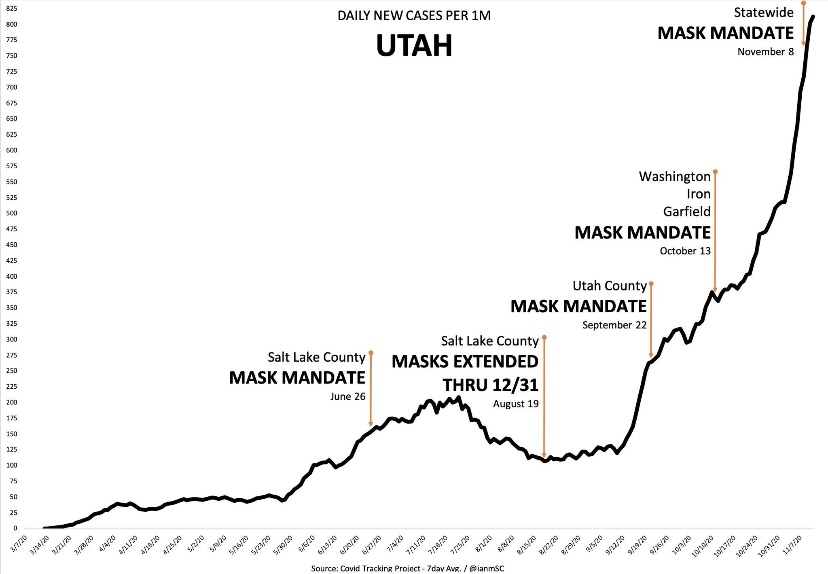 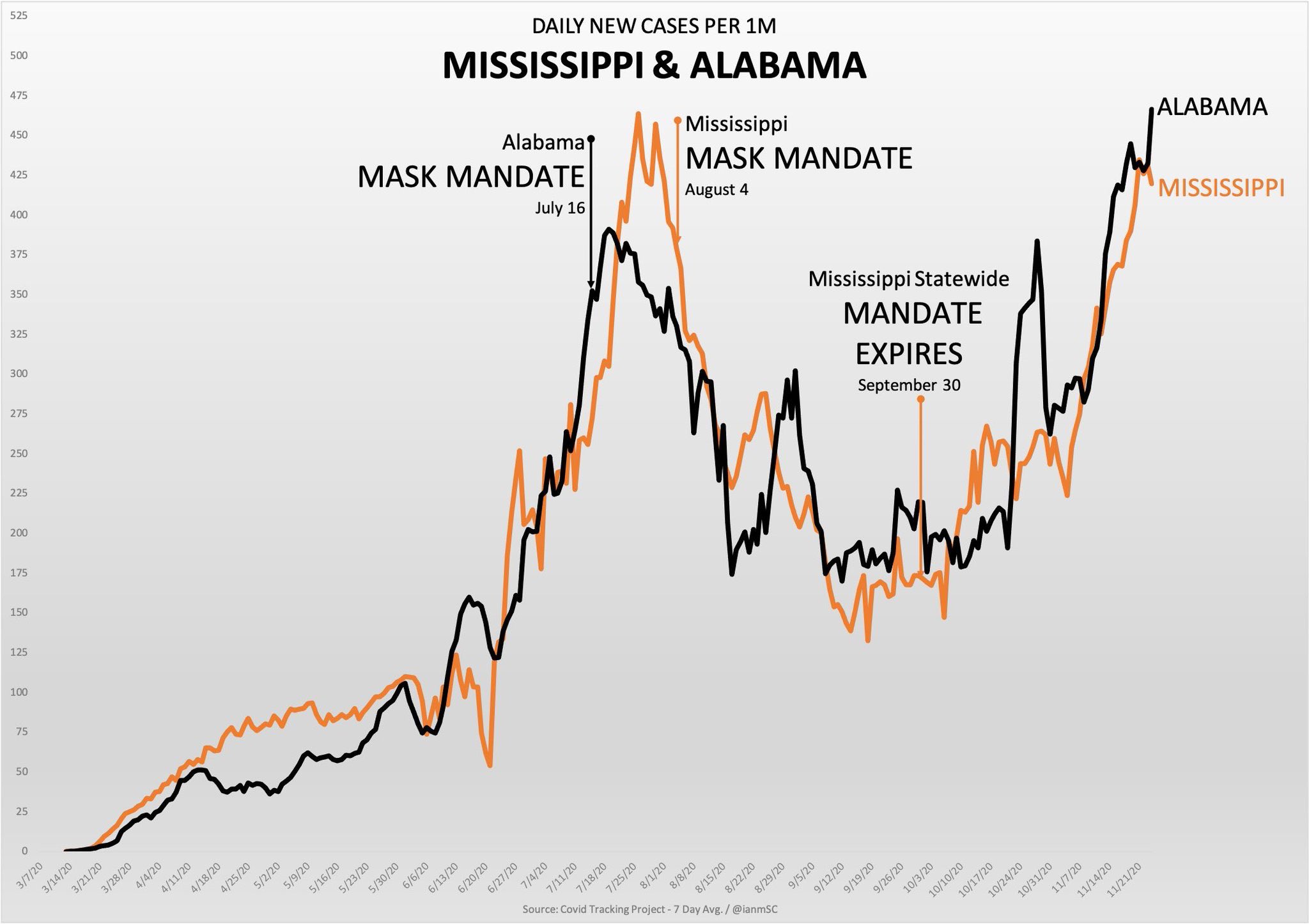 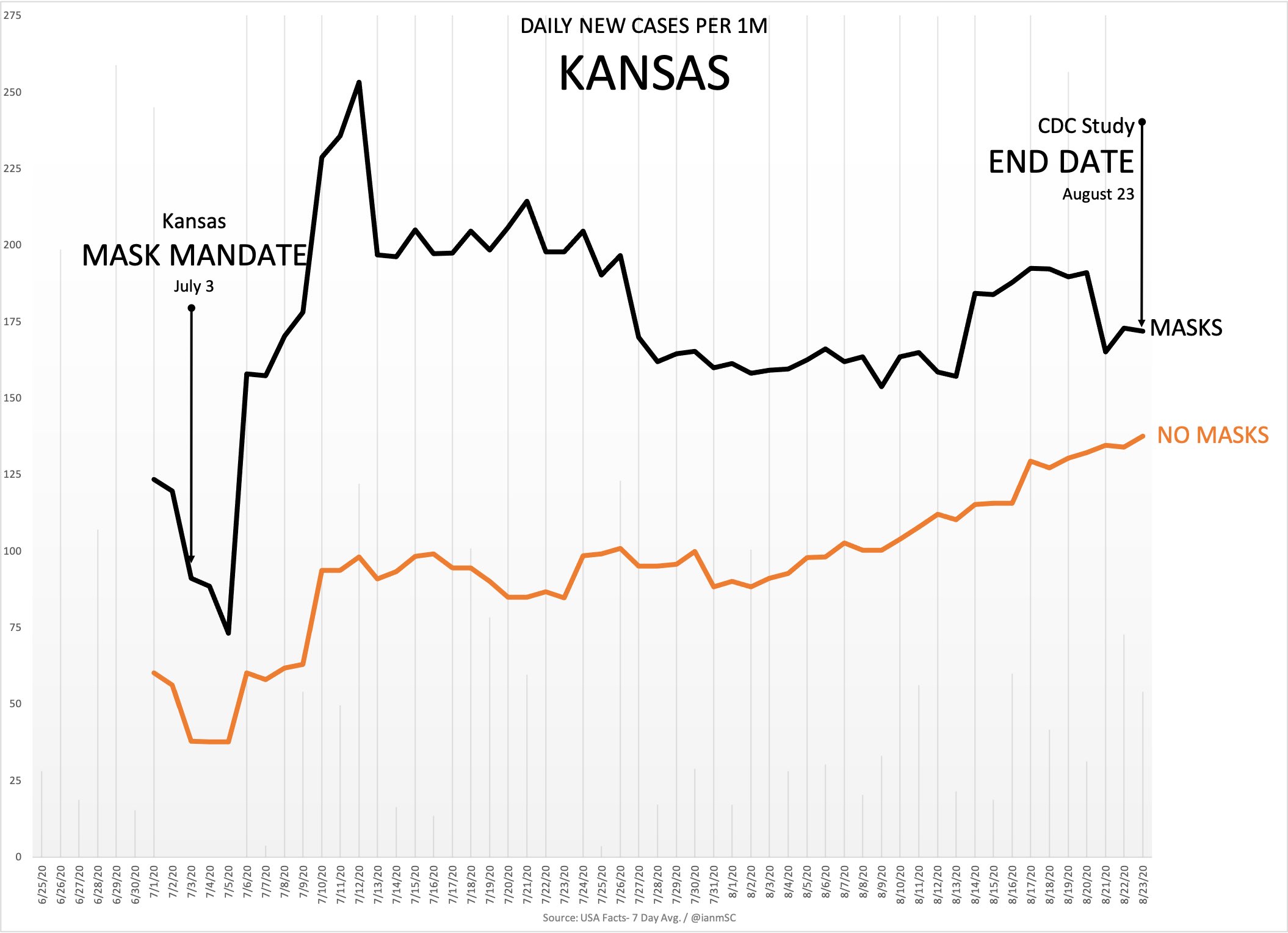 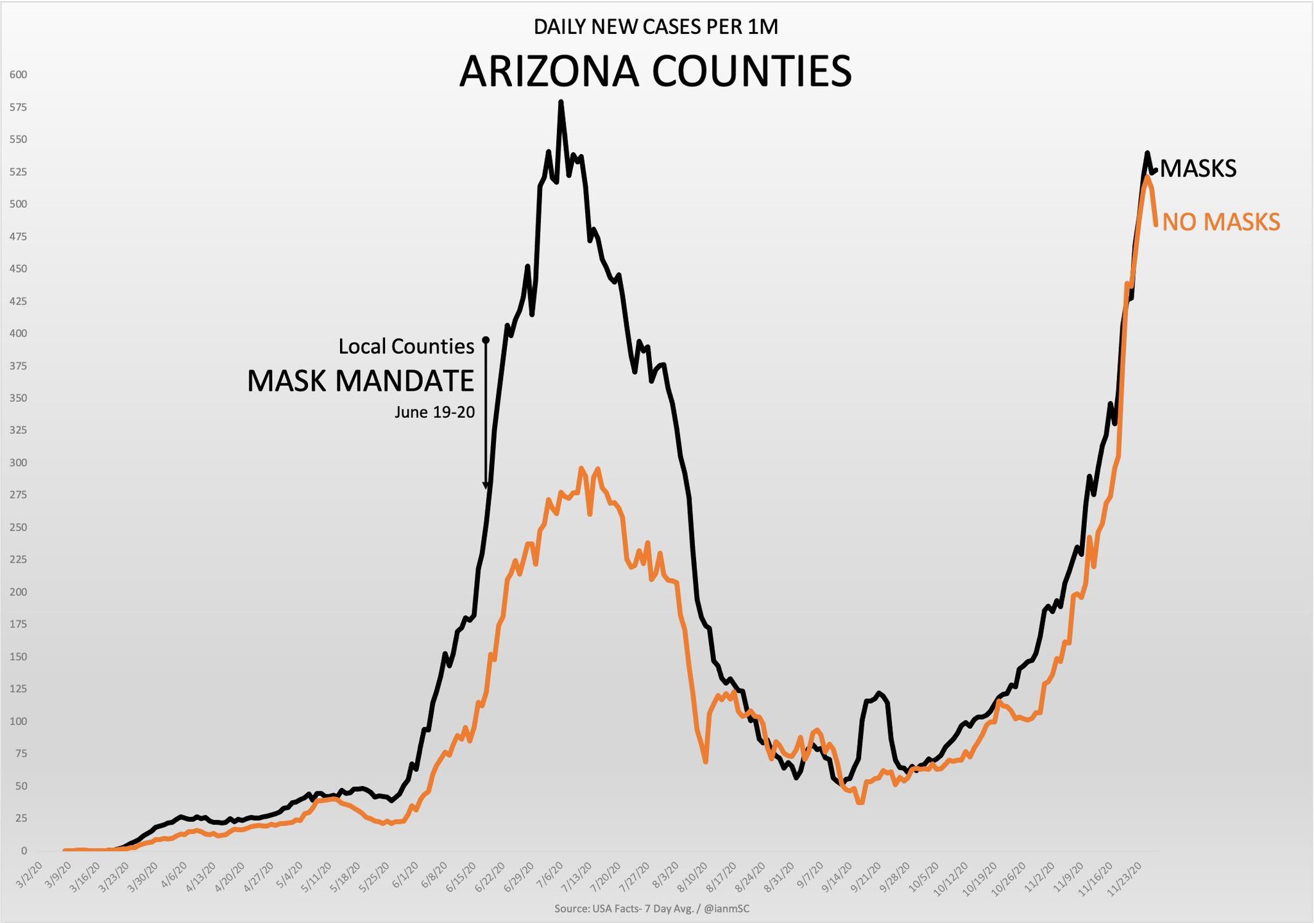 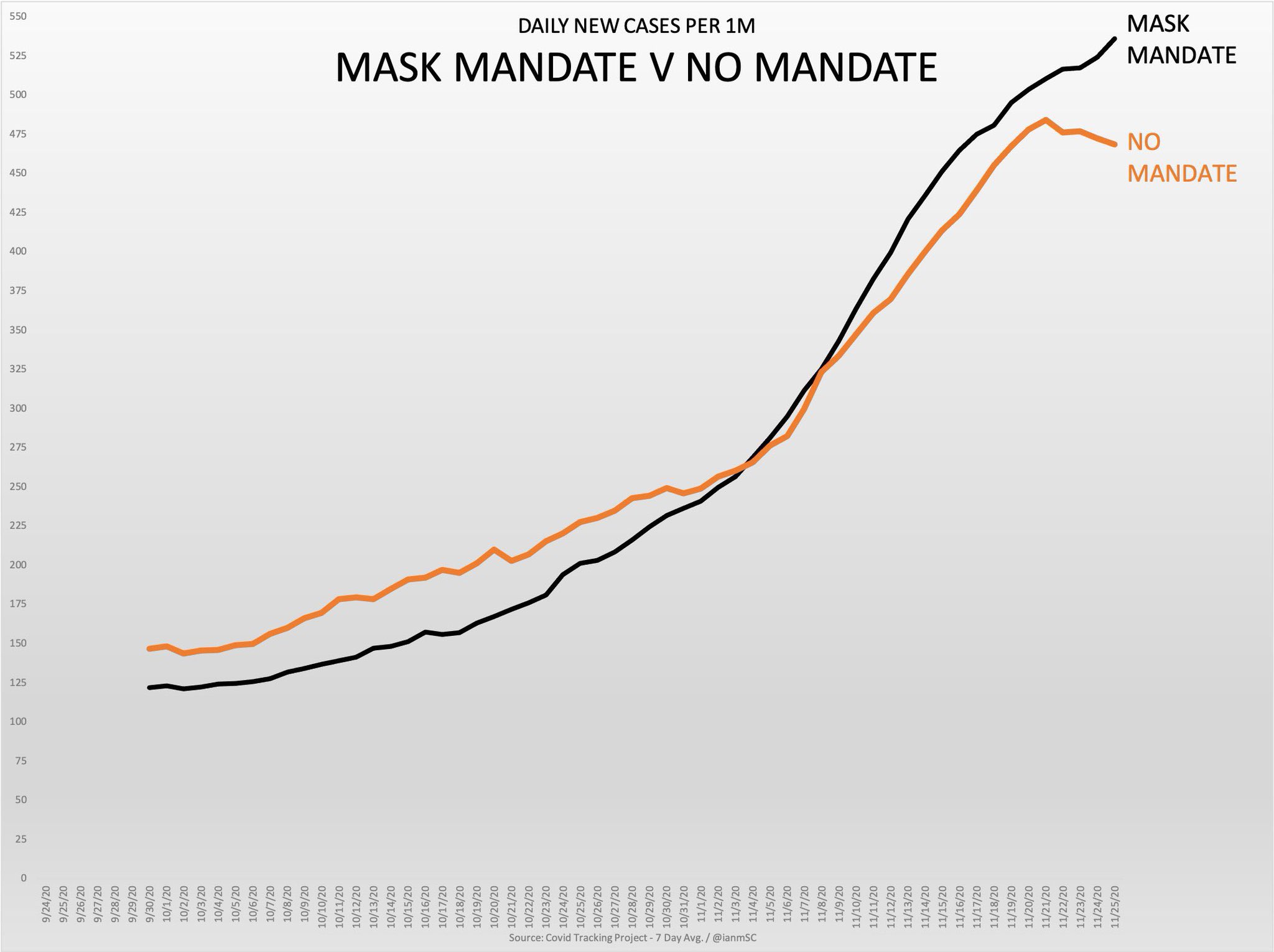 Were these charts to be left blank, you would not be able to accurately pin the mask mandate on the graph. If masks play such a pivotal role in disease mitigation, then these charts—more to be found here, here, here, and here—should look nothing like they do, especially in the United States where mask compliance, as of mid-August, was at 84 percent. If these visualizations appear to show anything, it is that the virus runs its course regardless of politicians' failed attempts to control it.

A brief note on "cases"

This has undoubtedly been a case-driven pandemic. Lockdowns, public health mandates, and societal panic ebb and flow alongside case count. Much, if not all of this panic can be attributed to extremely sensitive PCR tests, which are used to identify Covid-19 "cases." Quotations around "cases" are warranted given that the vast majority of positive PCR tests are detecting inert genetic material, essentially "dead" chunks of virus that pose no threat to anybody. A recent New York Times piece sums up the PCR sensitivity issue nicely.

Officials at the Wadsworth Center, New York’s state lab, have access to C.T. values from tests they have processed, and analyzed their numbers at The Times’s request. In July, the lab identified 872 positive tests, based on a threshold of 40 cycles. With a cutoff of 35, about 43 percent of those tests would no longer qualify as positive. About 63 percent would no longer be judged positive if the cycles were limited to 30. In Massachusetts, from 85 to 90 percent of people who tested positive in July with a cycle threshold of 40 would have been deemed negative if the threshold were 30 cycles. . .

In the same article Juliet Morrison, virologist at the University of California, said any PCR tests running more than 35 cycles are too sensitive, and Harvard epidemiologist Michael Mina even recommended a cycle count threshold of 30 or less! The same New York Times article also pointed to the CDC’s own calculations which suggest that “it is extremely difficult to detect any live virus in a sample above a threshold of 33 cycles.”

Ultra sensitive PCR testing leads to an artificially high "case" count, which translates into an artificially high number of Covid-19 hospitalizations—an excellent analysis of inflated Covid hospitalization numbers can be found here. Simply lowering the sensitivity of PCR tests to realistic levels would end our nation's baseless panic almost instantly. Surprisingly, despite these inflated numbers, United States hospitalization utilization rates remain under 80 percent in all areas except Rhode Island and Washington, D.C. In some regions, this represents an improvement over previous years.

The data have spoken, and we are long overdue for a return to normal life, not some dystopian "new normal" where strangers are faceless pathogens and gatherings are limited to ten people. The world desperately needs more "anti-science" individuals like New York City Councilman Joe Borelli, who tweeted the following prior to Thanksgiving:

I'll be having more than 10 ppl at my house on Thanksgiving. My address is public record. Some family will come from (gasp!) New Jersey.

Kids will see their grandparents, cousins will play in the yard, sis in law will bring strawberry rhubarb pie, & a turkey will be overcooked.

Of course this led to infuriated responses like "You're siding with the virus!", which more or less sums up the establishment's rebuttal of anyone who desires their own humanity or doesn't reflexively bow down to "expert authority."

Human beings are more than just passionless biological entities whose sole purpose is to remian fed, hydrated, go to work, and experience life on a laptop screen. Through its lockdowns and media-induced fear mongering, the state has all but destroyed the very things that make life worth living: musicals, concerts, holidays, professional sporting events, family gatherings and celebrations, recreational travel, religious worship, comedy gigs, art festivals, and so much more. These things technically still exist, but only as shadows in Plato's cave.